Has a 13th century philosopher’s idea led us to the doorstep of transhumanism? Transhumanism, in case you haven’t had the transhumanist salesman come to your door, is the idea that we can overcome every ill that besets humanity by using and eventually merging with technology. Once we chuck these decaying bodies (known as “wetware”) and get ourselves a new digitized home for our minds, we can live forever without disease or injury (as long as the electricity stays on). 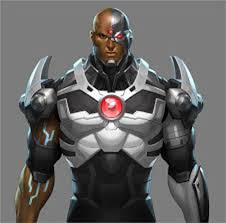 Although that’s quite a sales pitch, I shooed the transhumanist salesman off my doorstep. All the implications of transhumanism run counter to Christianity’s promise of resurrection, new bodies, and living in the presence of our Savior.

But apparently it is a Christian that started us on the road that led us to this point. Mark Shiffman, in his November 2015 First Things essay  “Humanity 4.5” blames it all on Duns Scotus, a Franciscan theologian born around 1266. 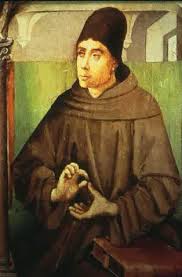 Shiffman says that many of the assumptions we make about how our world works are based on faulty propositions from Duns Scotus. Shiffman explains there are two ways of looking at how human beings are oriented toward God:

One way, proposed by Thomas Aquinas (who died in 1274), says that God is a completely different being than we are. Aquinas said the words we use for God are insufficient to describe Him because they are the same words we use to describe ourselves. He said God needs a completely different vocabulary. But, he conceded, since we only have the words we have, those words do give us some idea of how God is because his creation is a reflection of the character of God. But the main point was that we are not God and never will be.

Duns Scotus on the other hand said that we and God are on a continuum of being with us at one end and God at the other. The only difference between us is that we are finite and God is infinite, but we have the potential to progress up the ladder. All possibilities are open to us.

All possibilities are open to us! Is that so bad? That sounds like the lesson of every Disney princess movie ever made. And the Disney ethos is the same as God’s, right?

In fact, it is assumed (not proven) that the second idea is superior to the first, says Shiffman, and has led us to the idea that “the scientific method is the only reliable way of knowing.” Now, writes Shiffman,

“The world is not an order of beings manifesting God’s goodness; it is rather an order of inert matter in motion, available for the human will and intellect to master and manipulate.”

According to transhumanists, says Shiffman, the body is “raw material, a platform from which we can launch our possible selves.”

His essay is in response to a book by noted transhumanist Steve Fuller, professor at the University of Warwick, called The Proactionary Imperative: A Foundation for Transhumanism

. The title is a reaction to Leon Kass’ idea of a “precautionary principle” when it comes to messing around with the human genome. For more on how that kind of experimenting might turn out, see  The Island of Doctor Moreau.

Another transhumanist you may have heard about is Ray Kurzweil, inventor of a flatbed scanner and involved in optical character recognition (OCR), text-to-human speech, and music synthesizers. His genius has obviously contributed much to humanity’s well being, but maybe he should have stopped with the electronic pianos. The title of his book The Singularity Is Near: When Humans Transcend Biology

tells you all you need to know. The “singularity” is where human brains and mechanical brains merge. Something to look forward to.

Shiffman connects a variety of modern practices to the ideas of body as raw material, although modern readers may have a “what’s wrong with that?” response to his list. He writes,

“Why should we tolerate bondage to our frail flesh when we can split atoms and destroy cities? From the low-tech mania for tattooing and piercing, through the medium-tech tools of abortion, hormonal birth control, and transgendering, to the high-tech visions and explorations of genetic engineering and cyborgism, this rebellion seems to be gathering steam. An aggressive assertion of bodily self-ownership is becoming the new normal, with the status of a fundamental right.”

I think Shiffman may be a little late: Becoming a new normal? I think it’s a given.

But Shiffman is hopeful with the rise of classical schooling among Christians that the ideas of Christian humanism will return. He pleads for Christian educators to promote the “recovery of a biblical and philosophical understanding of created nature and the practical and spiritual relationship to it that fosters the human good.”

The promise of transhumanism is the possibility of building utopia on earth and eliminating all the bad things that happen here. That idea and the idea of self-ownership are very appealing to a culture so science-and-technology-based as our own. A discussion with your kids about what makes us human and how we are to live in the world in relation to God is one that can’t come too soon. And examining assumptions we think are truth is something we all should do. Duns, look what you have done.