“The Gospel of Jesus’ Wife” is not a gospel at all but a small strip of papyrus no bigger than a credit card that happens to contain the words,  “Jesus said to them, ‘My wife….'” This, of course, proves that our understandings of the gospels and of who Jesus was are totally incorrect. Dan Brown was right: Jesus had a wife. 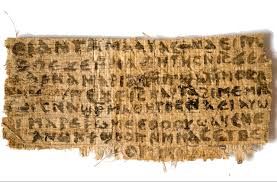 This fragment is in Coptic, an Egyptian language, but the original was presumably in Greek. The papyrus itself dates from around the 8th century A.D.

All interesting stuff, except for the fact that this fragment is a fake.

) and an article in Christianity Today about the fragment. Four other recognized scholars also sat on the panel*.

All the panelists agreed the fragment was a forgery. But this conclusion is still a matter of controversy. Harvard University bought the fragment in 2012 along with another “ancient” document for an unknown sum at the behest of Professor Karen King. Harvard is still touting this fragment as a genuine ancient text and says it “has significant implications for the history of ancient Christian attitudes toward marriage, sexuality, and reproduction.”

Of course it does. It’s just wonderful that in the midst of current cultural and religious discussions about these very topics, a hitherto unknown manuscript appears, and though it contains very few words, this tiny fragment (of some undiscovered greater whole) miraculously contains the very words that could significantly affect discussions of aforementioned timely topics. What a felicitous find!

Although the timing and content is suspiciously fortunate for progressive religious scholars, that is not the fragment’s main problem. The main problem is that the fragment is basically a copy of a Coptic translation of the Gospel of Thomas (written originally in Greek) with the timely “women’s roles” stuff thrown in. Though there were many Greek originals and other translations of the Gospel of Thomas circulating about in the 7th century (presumably the date of this fragment), we moderns have only one copy of this gospel, and it is in Coptic. There is a website where someone has transcribed this Coptic text of the Gospel of Thomas to the internet and in doing so, made a transcribing mistake. Strangely, this “Jesus’ Wife”  fragment in quoting the Gospel of Thomas quotes from the only translation that exists today and includes the typo found in the online version. What a strange coincidence.

According to these panelists, finding a nice clean sheet of ancient papyrus to write on today is fairly easy (if you truck with the ancient manuscript crowd). If you can make your manuscript look pretty authentic (even if it has a few tell-tale modern typos) and include some juicy sentences that reinforce academic pieties about the controversies of today, you might even be able to sell your creation to Harvard. And if they never cry foul (which Harvard to this day has not),  you are home free with a nice little sum in your pocket.

If you want to read more about this controversy, Gathercole and others have written a set of articles that appears in the July 2015 issue of the Cambridge Journal, New Testament Studies debunking this tiny and not so significant “gospel.”